Ordering tuna salad is always a bit tricky. First it has mayo. Icky. Then there's usually the demon cardboard vegetable celery in it. More ick. Truthfully, the mere thought of it turns me off to food completely.

To avoid all that nonsense, I make my own, which is better than any I've ever had. I know that sounds terribly arrogant. But I don't like eating the same thing on a daily basis and I've eaten this for the last 4 days. No kidding. I've craved it like a fiend.

Put it between two slices of bread and it's a special sandwich. Wrap it in lettuce or mix it with quinoa, even better. Eat it straight, simply delicious.

But if there's no mayonnaise, what holds it together? I routinely substitute Greek yogurt for mayo in everything else, so this is no different. And, of course, Dijon mustard. Without mustard, life is far too bland. Add in cucumbers for crunch and capers for a sour bite, and you have yourself tuna salad without the ick.

Unless you simply don't like tuna, then there's no hope for you. 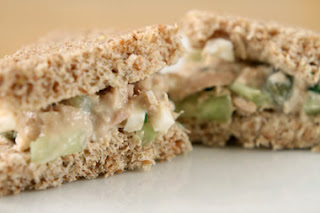 Add in a roasted pepper and you'll have a colorful plate. Or banana peppers. And pickles for even more sour crunch. But this right here, as is, it's as close to perfection as I've ever gotten in my own kitchen.

Which is saying a lot about a mere tuna salad.

This is a single serving recipe but scales easily.

No Mayo Tuna Salad
by Paulette Fontanez March-23-2012
A delicious combination of briny capers, crispy cucumbers, and fleshy tuna married with Dijon mustard and yogurt.
Ingredients
Instructions
In a bowl, mix together all the ingredients. Serve in a sandwich, a wrap, or with crackers.