I've been feeling stuck in the creative doldrums lately. I haven't been taking pictures, haven't been cooking, and certainly haven't been blogging. I have been working like a mad woman on that event planning thing that pays the bills, so that's partially to blame. To combat this, I forced myself back into the kitchen this past weekend, behind the stove and lens, and ran tests on three separate dishes.

It was good to be back. I even removed the safety net of food experimentation and invited friends over to taste what could have been three separate disasters. Turns out I might actually know how to cook, so not only did I not burn my house down, I scored a home run on all three.

Or, maybe three touchdowns? I had football on the entire time. I have three fantasy teams to keep track of, after all! There's a theme here...

The most popular dish was a riff on a Food 52 recipe. Instead of couscous and olives I opted for quinoa and capers because why the hell not? I really had no other reason.

There's something elegant in simplicity. A handful of simple ingredients + 20 minutes = a big explosion of deliciousness in one's mouth. Those little green capers will do that to you. They're like teeny bombs of sour awesomeness.

I'd actually made the original recipe a few months back. It's good. This was better. Capers kicked it up a few notches.

And it's not the first time I've played with cooking quinoa in unconventional ways. Quinoa for breakfast, anyone? Cooking it in orange juice didn't seem like too far a stretch.

I was also testing a recipe full of roasted red peppers, so I cut one up and threw it in this dish for a nice dash of color. But you could just as easily use pimento for a sweeter kick. That's what would probably be stuffed in your olives anyway. Life is full of choices.

Thank you to my wonderful buddies Elise, DeShawn, and Rob for their input. To quote one of them, "the capers and orange juice did a dance on my tongue as they co-mingled together." How great is that? You can make your tongue DANCE with this!

And thanks also to my mom for this cute little dish. I love it.

Citrus Quinoa
by adapted from Food 52 September-26-2012
A flavor combination that will make your tongue dance.
Ingredients
Instructions
1. Rinse the quinoa until the water runs clear (this removes the bitterness), then place in a pot with the orange juice. Cover, bring to a boil, then simmer for 20 minutes, until fully cooked.2. While the quinoa is cooking, sauté the minced shallot in olive oil until translucent. 3. Once the quinoa is finished cooking, fluff with a fork and fold in the shallot, capers, and pepper. Serve warm.
Details
Prep time: 5 mins Cook time: 20 mins Total time: 25 mins Yield: 2 cups
Posted by Paulette Erato at 6:22 AM 1 comment:
Email ThisBlogThis!Share to TwitterShare to FacebookShare to Pinterest
Labels: capers, orange juice, quinoa, shallots 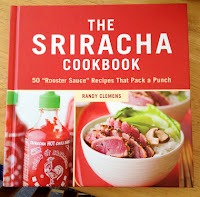 My dear foodie friend Oakley, who I mention  often, hosted a dinner party. After we had our fill of tandoori chicken and a half-naked Ryan Reynolds on tv, there was gifting!

I came away with a cookbook dedicated to all things sriracha, aka rooster sauce. I put this on everything, when I’m not using (or—gasp!—out of) salsa verde. So it was only natural that I’d want to make little vittles with it too. Well, it turns out the book is a bit simple (add sriracha to whipped cream cheese and voila! A new dip…?), but the one recipe that intrigued me was a loaf of sriracha cheese bread.

I’ve stopped saying that I don’t bake, but I’m still not in love with getting flour all over my kitchen. When you have tile countertops, cleaning flour particles out of the grout is a huge pain in the ass. But you could cut 15 steps out of the recipe by simply using pre-made pizza dough and I’m all for shortcuts! Trader Joe’s sells pizza dough for all of $1.50. With that, a quarter cup of rooster sauce, and a cup of cheese, you’re done!

Of course, flour still gets all over the kitchen because you have to roll said pizza dough out to a 9-inch rectangle, so it’s still a pain in the ass. But it wouldn’t be baking if we missed this crucial step.

Spread about a quarter cup of the sauce out, leaving a 1-inch border. Cover with shredded cheese (I used cheddar—but you can substitute your fancy sriracha cream cheese dip…?), roll it up jelly roll style, and bake for 20 minutes in a bread pan at 400 degrees. You will want to slice the top to give the bread room to puff up. And give it a good egg or olive oil wash, to crust the top. You’ll have a spicy bread within the hour (once you let it cool, lest burning your tongue is on your agenda).

I didn’t do the wash part and my loaf looked a bit albino in the end. Note for next time.

For the original recipe, check out The Sriracha Cookbook. 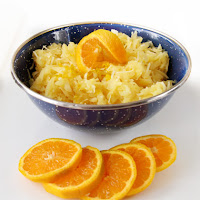 The same day I tested the Mexican chocolate cookies, I tested a recipe courtesy of The Sweet Life.  Vianney has spent more time in Mexico than I have, and I was excited to taste this dish I’d never even heard of.

The only way I’ve ever eaten jicama is raw, cut into sticks and sprinkled with chile for pico de gallo. I really like it this way, so I was intrigued by the sweet turn.

Jicamas are ugly on the outside. They look like dirty roots. But you know what your mother said about judging books by their covers. They’re similar to potatoes in firmness, but blander in taste. They actually don’t have much flavor at all, which is why you often see them with the chile! Or with lime juice (or both).

Apparently my sweet tooth is of a Mexican variety, given I made this and the chocolate cookies at the same time. But I really liked this recipe. It's simple, as cooking should be. And I love Vianney's stories. Of course, I had to make modifications, because when do I ever take the easy route? I couldn't find unsweetened coconut, so that's where it started.

The orange juice took far longer to boil off than Vianney’s recipe stated. Maybe she boiled at a higher level of heat. I was being overly cautious, not wanting to burn this. And since I was using sweetened coconut, I simply left out the sugar…though it still came out tremendously sweet. This is something you eat in small quantities, like a tiny bit on ice cream.

The G+F taste testers were all on board. Luckily none of them hate coconut, like some people who confound me. I love coconut! Especially the fresh coconuts we’d have in Mexico when I visited as a child. The street vendors had huge green ones they chopped open with machetes and then stuck a straw in for your slurping delight. Such good memories of visiting family.

Maybe next time, we’ll all indulge in this dulce!

Original recipe over at The Sweet Life.
Posted by Paulette Erato at 7:19 AM 1 comment:
Email ThisBlogThis!Share to TwitterShare to FacebookShare to Pinterest
Labels: bloggers, coconut, dessert, orange

For the last 25+ years, my family has been frequenting the same Thai restaurant in Burbank. To pass it on to the next generation, my brother’s family orders take-out from it regularly. I have always ordered the chicken satay. I love slathering the chicken skewers with peanut sauce and then sprinkling on the sweet vinegar from the cucumber salad before popping it in my mouth. To this day, it reminds me of being seven years old.

But what is that sweet and sour relish filled with cucumbers and onions? Oh, it’s known by many names, but the proper name is ajad. Or ajat, ached, or อาจาด. My Thai friend Oakley, she of the Oakmonster food blog—and the catalyst for the bacon scotch we always keep on hand in the G+F kitchen—told me ajad is correct. And because she will play tour guide on my eventual trip to Thailand, I believe her. She’s also originally from Bangkok, so she should know.

And who knew it was the easiest dish to make? Certainly not seven year old me, who believed this sweet and sour concoction must be magical. I was always afraid to finish it for fear that there would be none the next time. The innocence of childhood!

But it truly is so simple. Cut up a cucumber, some shallots, a pepper (I prefer red Fresnos for color, as do the folks at Saveur), boil some water, mix it with vinegar and sugar, toss in some cilantro, and you’re done. Waiting for it to cool enough to eat is the hardest part.

This keeps well in the fridge for quite some time, given the preservative qualities of the vinegar (and sugar). I now consistently keep it on hand. Because it IS magical. And I never want it to disappear!

Saveur’s recipe calls for a LOT of shallots. I rarely use more than one small one for a large cucumber. Your mileage may vary.