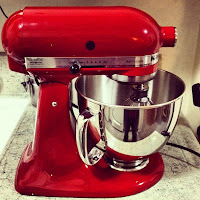 My birthday is next week, so as an early birthday present, I bought myself this beautiful red stand mixer. And the first thing I made was gooey marshmallows.

Ooey gooey sticky vanilla marshmallows. And then at the last second, I added in a bit of bacon whiskey.

Another non-surprise: making marshmallows is messy business. You're going to get sugar and cornstarch everywhere. Clean that up, you don't want ants! I hate making a mess. I also hate waiting overnight for dessert.

Why did I do this? I don't even really like marshmallows. I definitely do not crave them the way I do that other messy time-intensive cooking project, cheese.

People who make their own marshmallows say things like "you'll never eat store bought again." Why not? Buying and then devouring a bag full of mass-produced marshmallows will make you just as fat as eating the ones you make yourself. The only difference: there's no mess in the kitchen to clean up before the ants get to it.

I guess it was the challenge presented by this. And the way they looked in the morning light, once I finally cut them all to size:

That took forever too. I really started to hate marshmallows once this was all said and done.

This recipe from Thomas Keller's French Laundry Cookbook was very easy, at least. No need for candy thermometers, just boil some sugar, water, and corn syrup together, then beat it for 12-ish minutes with bloomed gelatin, add the flavorings (I tossed in the whiskey with the vanilla), pour into a pan and let it sit for a while. Cut, dust with confectioner's sugar, eat, done. In the end you'll be left with a trillion squares and powdered sugar everywhere.

There are other recipes that call for egg whites. That's probably messier still.

I'm not doing this again. It was a complete waste of whiskey and now I have a trillion of them in the pantry.

Or if I somehow forget this lesson, I'll use the Alton Brown method of making mini mallows.

As for my birthday present, what will I use it for next?
Posted by Paulette Erato at 8:44 AM
Email ThisBlogThis!Share to TwitterShare to FacebookShare to Pinterest
Labels: marshmallows, Thomas Keller, whiskey

Firstly, what, are you having a midlife crisis with that gleaming red Ferrari of a mixer? Boy is that gorgeous!

Secondly,you can freeze those mallows until you come to a FBLA meeting, at which time you can break them out and we will ALL EAT THEM, lickety split!

Thirdly, make S'mores with them, and stick a piece of bacon as one of the S'more layers. Call it breakfast (the bacon qualifies it).

Oh wow, am I having a mid-life crisis? Ouch.

If they're still around, I'm definitely bringing them to the next meeting, don't you worry!

I do love the bacon idea, though.

Thanks for the early birthday happies.

ooh, what a fun idea! Homemade marshmallows are a great base for a lot of different flavors - I'm going to have to try this one :)