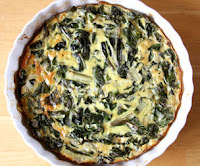 Know what a silver beet is? It sounds magical, but really it's what Swiss chard is called in Australia (in Germany it's mangold). Know what the difference between Swiss chard and regular chard is? According to Wikipedia: nothing. We just like to call the same things different words.

A quick email to my Australian friend confirmed they are indeed the same thing, though she added, "People commonly think silver beet is spinach. But it’s not."

So it's NOT spinach, got that? Back to our friendly internet resource, Wikipedia claims the "Swiss" part was added precisely to differentiate the greens from French spinach in 19th century seed catalogs. That was back before the internet could help sort it all out. You had to eat it, and if your teeth felt fuzzy, you knew it was spinach.

Swiss chard, mangold, regular chard, spinach...I'll call it silver beet because that sounds neato. And also because I like chard but I hate beets, so hopefully this will help me get over my aversion.

My silver beets didn't have red stalks. How do you tell the difference between red chard and just plain rhubarb? Rhubarb is a fruit used in pies and red chard is like spinach with red veins. There you go.

This began as a simple spinach quiche. I used to make it a lot back in the day before I actually knew how to "cook." Instead of the cheddar I would normally use, I threw in the leftover smoked oyster dip from last week and voila! More protein. With the superfood chard, eggs, and oysters, this is probably the most protein-charged meal I've made recently. Or ever.

Since the cheese in the dip is so very salty/sour, the taste is quite different from a regular quiche. It's also more oyster-y. But it's good for you. Might turn you into a super-hero.*

Douse this with some salsa colorada and say ahhh!

Crustless Smoked Oyster & Silver Beet Quiche
by Paulette Fontanez April-12-2012
A fusion of a smoked oyster dip and spinach-like chard in an eggy pie.
Ingredients
Instructions
1. Preheat the oven to 350 degrees and lightly grease a 9-inch pie pan.2. Heat oil in a skillet over medium heat. Sauté the onions until they are soft, just before they start to brown. Then stir in silver beet and continue cooking until bright green. Remove from heat.3. In a bowl, combine the eggs with the smoked oyster dip. Add the silver beet/onion mixture and ensure it's evenly mixed together. Spread mixture into greased pie pan, evenly.4. Bake until top is slightly brown, about 30-40 minutes. Eggs should be set and a toothpick comes out clean. Serve warm.
Details
Prep time: 10 mins Cook time: 40 mins Total time: 50 mins Yields: 1 9" pie
Posted by Paulette Erato at 8:30 AM
Email ThisBlogThis!Share to TwitterShare to FacebookShare to Pinterest
Labels: © Paulette Fontanez, eggs, quiche, silver beet, smoked oysters, swiss chard